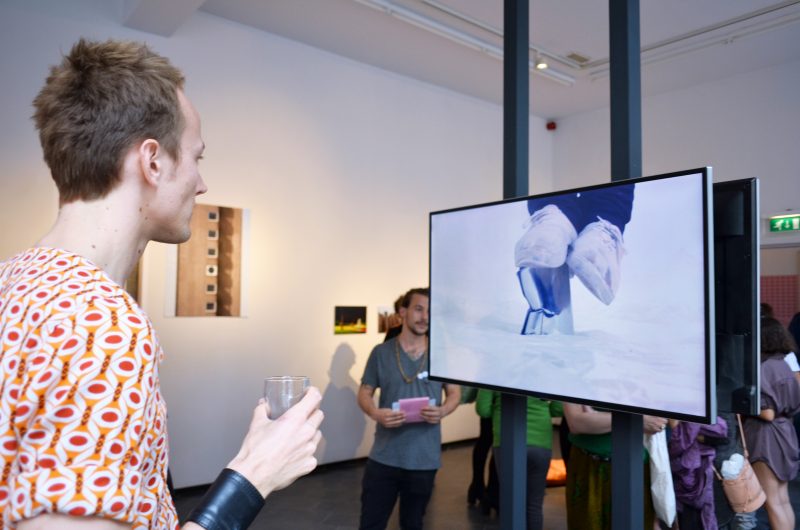 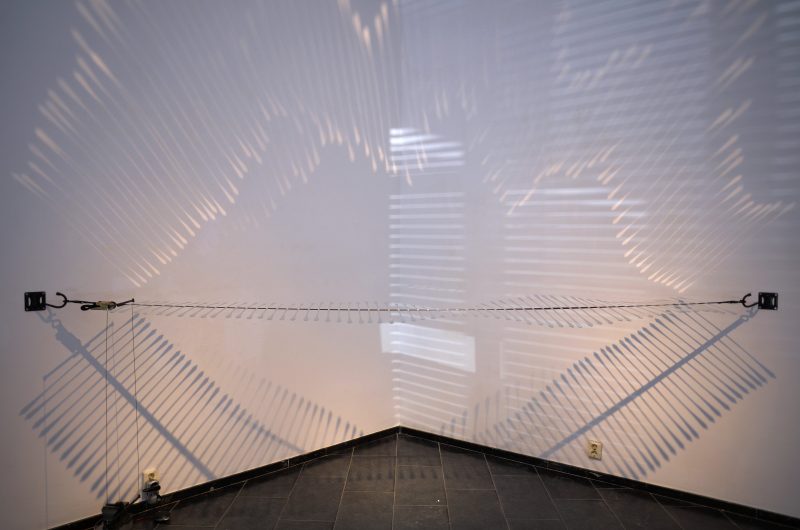 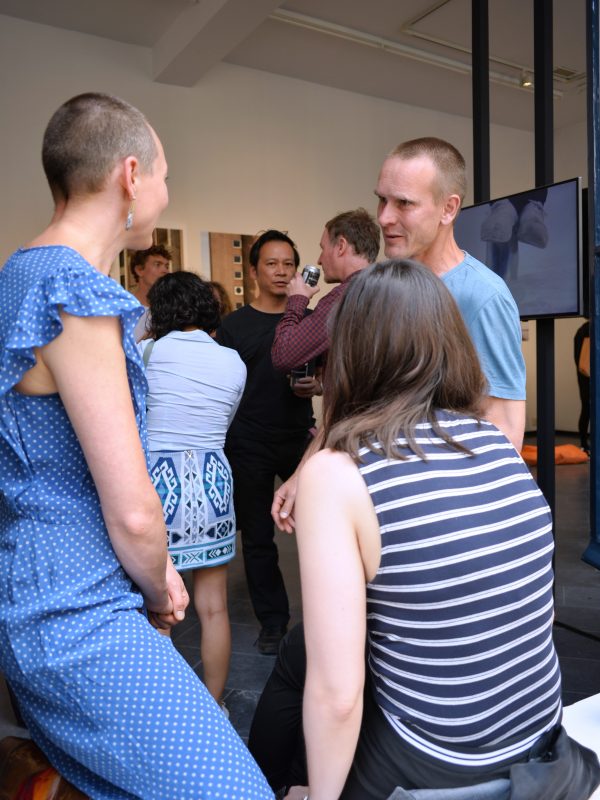 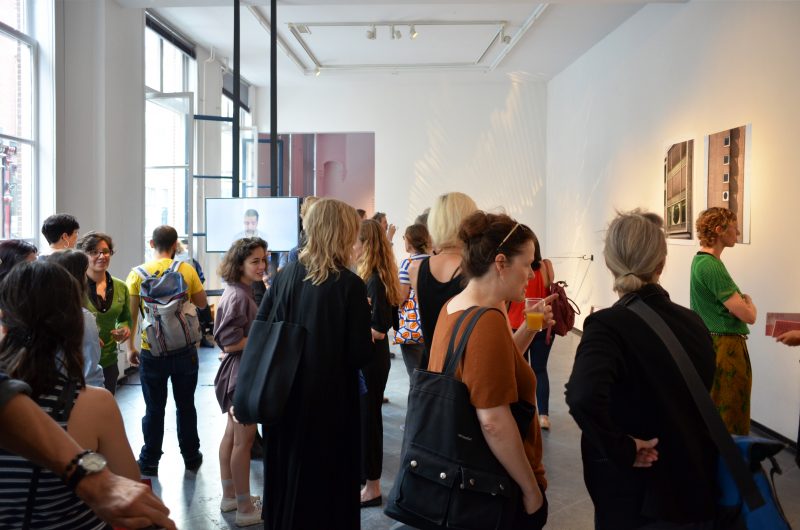 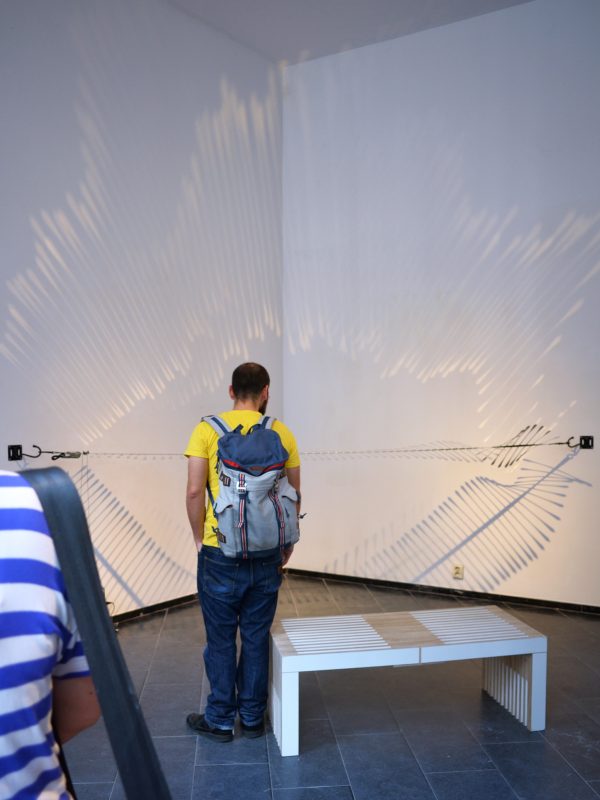 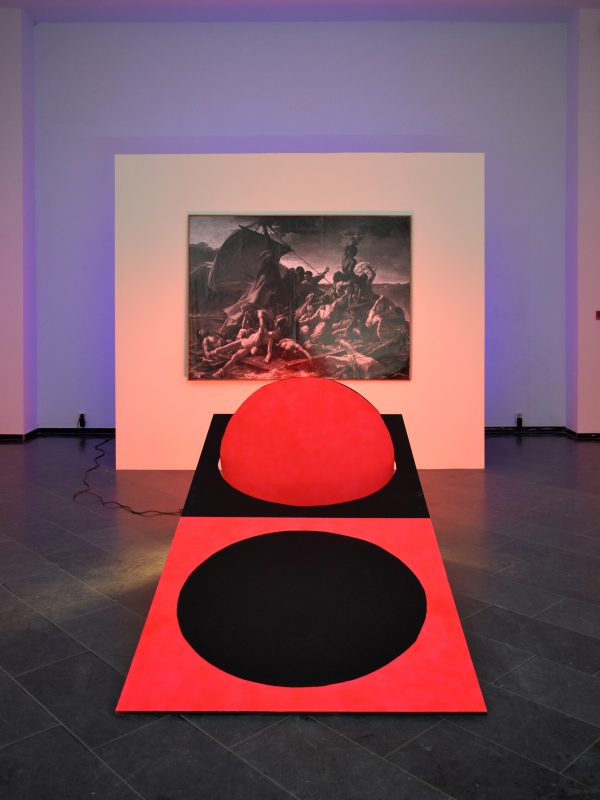 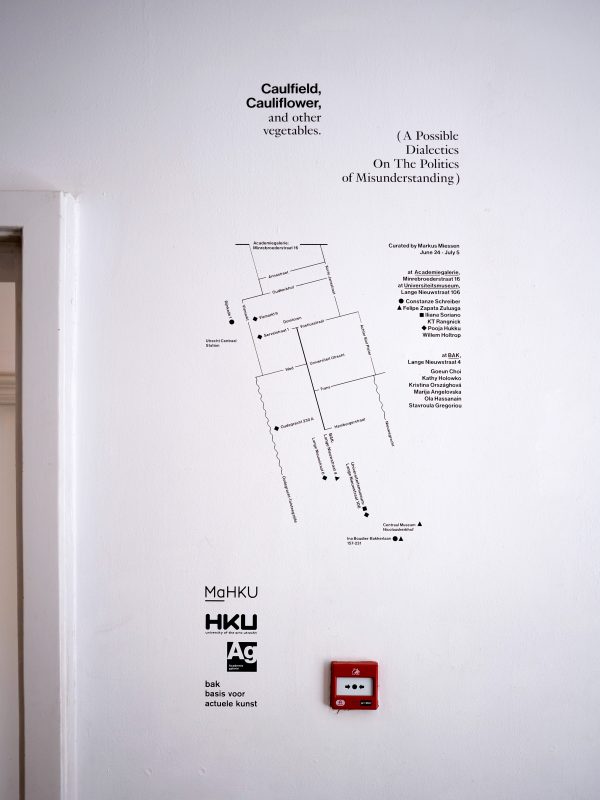 What do you do with a show, where there is no narrative for a show? Where there is no red thread, no umbrella framework or common denominator in terms of content. When I first arrived at MaHKU halfway through the year, I encountered an inspiring, but scattered group of individuals, dealing with personal challenges and processes of identity formulation. The only means of unity that I was able to detect was that they seemed to be working in the same space, their studio.

The frame: a particular year (2016) in a particular graduate program (MaHKU Fine Art). Critical practice, in this context, could be imagined as parallel realities pushing in the same direction, that is, interrogating the political and spatial realities that the protagonists understand as their social and societal context. The work at play here presents polymorphous and polymathic approaches to the subjective documentation of the contemporary condition, diverse narrative takes, which often take as a starting point the personal struggle with the world, but more precisely the surveying of oneself as a critical being. Such practice should be understood and exercised as a sounding-board that makes visible and discloses the underlying conflicts of what one is facing, to exacerbate them, to create and nurture complications, to work with and around them in a productive way, and to then act upon them.

Empowerment sometimes emerges in conditions that theoretically ought to thwart it. Knowledge is often generated at the edges or the gaps of ignorance. Hence, personal involvement should simply be understood as a tactic of complicit curiosity scaled to the space that one is currently inhabiting. It offers an alternative rendering of a possible practice that goes beyond the conventional understanding of discipline and vocation. It resembles a framework through which to act: not a strictly political one, but rather an arena for the discussion of how practice itself can become political.

Literature is highly personal and biased. Most (good) literature has a “Doppelter Boden” (double layer).The narrative therefore is not only one of self-experience, but that which can be projected onto and against a civil society. As opposed to journalism, which is supposed to report about a forensic reality, literature holds the opportunity to smuggle different narratives and messages across. A “Doppelter Boden” is an intrinsically spatial phenomenon, as in order for the message to be transported and deployed one needs to construct the very space in which a parallel reality can unfold.

Holden Caulfield, the protagonist in Salinger’s The Catcher in the Rye, explains his love affair with the museum (Museum of Natural History) by nebulously stating parts of his personal insecurity. In life, with the world surrounding him. Like all of us, he is not only facing narratives of constant change, but also decay and loss. He demonstrates his fears and inability of dealing with conflict, confusion, and ultimately change. Being thrown into the dirty reality of the now, this exhibition presents a series of extremely relevant positions that deal with this very question of contemporary identity(ies) and the way in which those can be localized and grounded in a world exposed to constant flux. Maybe one of the reasons why many of us are engaged in a similar love affair with the museum is precisely its ability (and reality) to preserve and maintain a form of stoicism and silence. It is (almost) always the same.

Cauliflower, as the arguably hottest (vegetable) shit on the market right now, faces the sad reality of a formerly neglected plant that has suddenly risen to fame (again). It seems that the market of the vegetable unfolds as a two-fold problematic here: not only has it become more sought-after, but it is unclear for how long its net-worth will remain intact.

Torn between questions of identity and a soon-to-be-dealt with dirty reality of the market, the positions in the exhibition range from Sudanese gender politics, Korean sex culture, methods of automatism, postcolonial subjectivities, to the arguable dichotomy between the craftsman and the intellectual, heritage and knowledge, architectural bastardisation, to human stewardship, the father figure, electric smog, the objectification and censorship of the female body, formats of (social) coding, to painting as spatial practice.

Instead of crudely enforcing and presenting a (fictional) narrative that did not exist in the first place, the opening of the exhibition will be used as an opportunity to informally discuss questions of identity, development, success and dirty realism in the nebula of what is commonly referred to as the art world. Partners-in-crime will be artist Flaka Haliti, cultural critic Timo Feldhaus, and curatorial consultant Marie Egger.